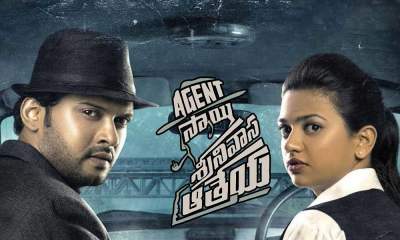 Agent Sai Sreenivas Athreya wakes up in the middle of the night to a personal tragedy, the death of his mother. He goes home to Nellore from his college in Bhopal, only to see his mother has already been cremated by his uncle.

3 years later, he now becomes a detective in Nellore, setting up FBI (Fathima Bureau of Investigation). His assistant Sneha helps him in cases. Athreya is mostly involved in solving petty cases. One day his writer friend Sirish informs him of an unidentified body in Venkatachalam.

When he goes there, the police arrest him on suspicion of murder. In jail that night, Athreya meets a man who acknowledges himself as Maruthi Rao and tells him the story of his daughter Divya, who went missing after going to Ongole. He gives him 3 phone numbers of three people who were the last who had contacted Divya before she was supposedly murdered. Ajay, Harsha, and Vasudha. Athreya and Sneha, upon investigation based on the phone numbers, confirm that

Ajay and Harsha were in Ongole the day Divya was murdered, while Vasudha cannot be traced. They follow them both all day, who go to a car rental agency, mortuary, and railroad. At the end of the day, Athreya recognizes Divya somewhere along a highway, who doesn’t speak Telugu, ignoring him.

Upon checking at the police station at Nellore, they find that no Maruti Rao was transferred from the rural station in the last three days. Upon checking at the rural station, they find that the person who had called himself Maruti Rao is actually Gopalam. Further inquiry with the station in Ongole reveals that on the day that Divya was claimed to be dead, the body found was male. Later, at a Dhaba, Athreya discovers Ajay was brutally murdered and he is promptly arrested as the prime suspect.