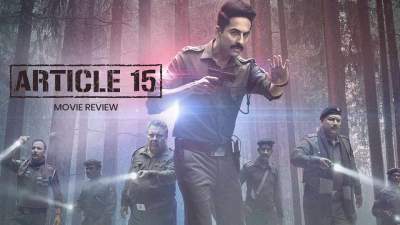 The film deals with Article 15 of the Constitution of India, which prohibits discrimination on grounds of religion, race, caste, sex or place of birth. While not based on one specific event, the film is inspired by multiple true life events including 2014 Badaun gang rape allegations and 2016 Una flogging incident. Principal photography began on 1 March 2019 in Lucknow. The film’s soundtrack was composed by Anurag Saikia, Piyush Shankar, Devin Parker and Gingger with lyrics written by Rashmi Virag, Shakeel Azmi, Slow Cheeta, Dee MC, Kaam Bhaari and SpitFire, and released under the banner Zee Music Company.

Article 15 was the opening film for the 10th edition of London Indian Film Festival, premiering on 20 June 2019. It was theatrically released in India on 28 June 2019. The film received positive reviews from critics for the sensitive portrayal of its subject matter, and grossed over ₹93.08 crore (US$13 million) worldwide to become a commercial success.