REVIEW: Created by Harman Baweja, Vicky Bahri and Rahul Prakash, ‘Bhaukaal’ is stimulated by real-life incidents and the adventure of IPS Officer Navniet Sekera, who rose to prominence as a ‘tremendous cop’ after eradicating many gang lords from Uttar Pradesh. When it involves criminals and police officers attempting to hold control, the story will undoubtedly be full of carnage, gang wars, kidnappings, marauding, gaalis, guns and whatnot. And the sequel, ‘Bhaukaal 2’ kickstarts with even extra brutality and a bloodbath. 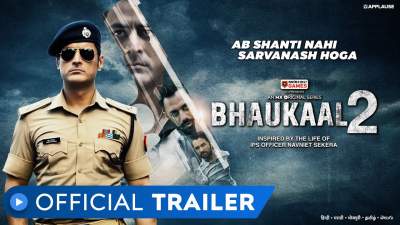 Season 2 of ‘Bhaukaal’ alternatives up from wherein the first one ended. Following the assassination of Shaukeen, one of the gang’s leaders, his lady friend Nazneen (Bidita Bag) and MP Aslam Rana (Late Major Bikramjeet Kanwarpal) team up with the Dedha brothers—Pintu (Pradeep Nagar) and Chintu (Siddhanth Kapoor). Director Jatin Wagle, who also co-wrote this crime drama with Jay Sheela Bansal and Akash Mohimen, maintains to feature layers to the subject of how mafias feature, how politicians exploit them for his or her personal advantage, how the police operate, and the way their fingers are often tied to follow protocols.

If you have got visible season one and enjoyed its dark narrative, then the new season clearly usathe ante. However, the overall execution of an fascinating premise is a gradual burn. The cat-and-mouse chases get antique after some time, and the movement would not begin until the 6th episode. Nonetheless, there may be a few relatability with the protagonist Kaptaan (‘captain’, as the locales, consult with Naveen), it’s simpler to empathise along with his pain of seeing human beings die in the front of him and being powerless to stop it because criminals are continually one step ahead of them. Finally, there’s the grand climax (whilst the lead confronts the antagonist), which makes it well worth watching.