Watching “Dabangg 3” it’s clear that the law of diminishing returns has caught up with this franchise. There is just no polite way to say this – the new film is an excruciating, exhausting bore. 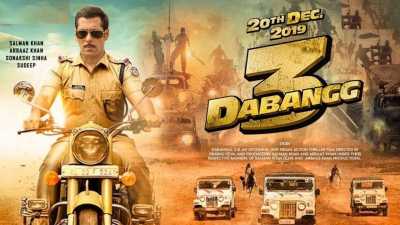 In 2010 under the direction of Abhinav Kashyap, it seemed like Salman Khan had found his superhero alter ego. Charming rogue cop Chulbul Pandey, with his cheeky one-liners, oddball quirks, and cartoonish but effective fight moves was the actor’s best realized character in years. Even 2012’s decidedly mediocre sequel “Dabangg 2”, directed by Arbaaz Khan, had stray moments of inspired lunacy that suggested some promise. But this third installment, directed by Prabhu Deva and scripted by Salman Khan himself, is irredeemable.

To apply common superhero parlance, the new film tells the origin story of Chulbul Pandey. We learn what his real name is, what led to him become a police officer, and where he swiped his signature line from – the one that goes: “Hum tum mein itne chhed karenge ki confuse ho jaoge ki saans kahan se le aur paadein kahan se.” We also learn about a doomed romance of his with a young girl named Khushi (Saiee Manjrekar), before he met and married Rajjo (Sonakshi Sinha).

Now I don’t know about you but watching a 54-year-old Salman Khan romance the baby-faced 21-year-old newcomer on screen is exactly the reminder we need about Bollywood’s double standards when it comes to gender and age. It’s as if the filmmakers decided Sonakshi Sinha at 32 is already too old to be the film’s sole leading lady, so let’s bring in another one that’s even younger. Salman, meanwhile, thanks to some nifty computer effects, is made to look a tad younger himself in these portions.