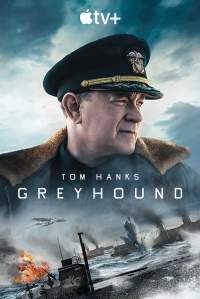 One of the most crucial long-drawn conflicts of World War II was the Battle Of Atlantic, which lasted nearly three years. Greyhound gives us a tiny slice of it, in this war drama based on a C S Forester novel, The Good Shepherd.

One of the first things you notice is that for a film of its kind, it’s surprisingly quiet. Yes, we hear the slap of the waves, the shouts of the soldiers, the boom of the guns, but the noise is not overpowering. There are pauses. In between the commands given to his crew by Commander Ernest Krause (Hanks), the tense engagements between the German U Boats and the Allied destroyers, the loss of men and material, and the close-shaves, we are given thinking time. Stands to reason because its leading man, a self-confessed World War II junkie, has also written the script. And in some ways, both author and script are alike: quiet and effective, without flourish. Greyhound is more a dogged, determined portrayal of the processes of battle– how the captain takes the hard-judged decisions, how they are relayed down the chain of command, how soldiers and their instruments work as one, how exhaustion beats down upon everyone, and how the enemy is always around the corner—than an epic.