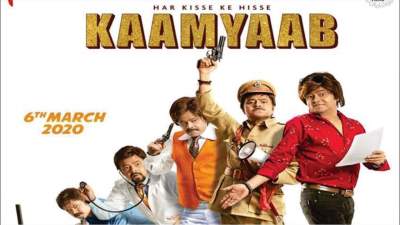 In one scene of Har Kisse Ke Hisse Kaamyaab, the protagonist, an actor who goes under the screen name of Sudheer, cannot get his lines right, because he has not had a swig of his favourite brew, and gives retake after retake. We see him do seven/eight retakes, after which, mercifully, the film-maker goes into a montage, with only music, after which it is revealed that he had given as many as 32 retakes. Mercifully, the film’s director spared us some 25 samples. Count this among the small mercies that are offered and grab it with both hands. A film whose title means ‘Parts of every tale successful’ only succeeds in evoking a mixture of pity and outrage.

A man called Babulal Chandola hails from the Garhwal region of north India and has worked as a bit player/character actor in films for several decades, adopting the screen-name of Sudheer. During the shooting of an interview aimed at motivating Garhwali youth, he becomes extra frank and honest, prompting the interviewer, a female, to cut the shot. She tells him to talk about his career and highlights, rather than paint a gloomy picture. She asks him that, since according to imdb, he has acted in 499 films, why did he not complete 500? This is news to Sudheer, who was not aware of being so close to a landmark that had been crossed by actors like Pran, Shakti Kapoor and Man Mouji. Encouraged by a friend, Mehra, the retired Sudheer returns, to put on make-up and notch-up the magic figure.