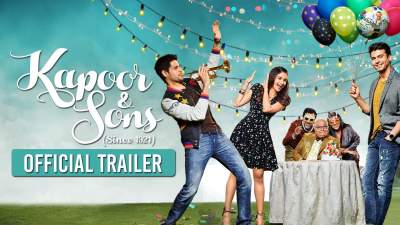 Kapoor and Sons Movie Review: By the end of it, you feel like giving this family a group hug The biggest triumph of this film, which stars Rishi Kapoor, Fawad Khan, Sidharth Malhotra, Ratna Pathak Shah and Alia Bhatt, is that by the end, I felt like I was a member of this family

Kapoor and Sons is a portrait of human frailty. It’s about our flaws, our wounds, our losses, our resentments and regrets. It’s about the pain we inflict on each other – the slights, big and small. And it’s about the ties that bind and the love that endures. The love, which ultimately allows us to do both – forgive ourselves and find redemption in our relationships.

The story is almost entirely set in the hill station of Conoor. An ageing grandfather has a heart attack.The grand children are forced to come home. Both are writers. Arjun is a part-time bartender in New Jersey who is trying to be a novelist. Rahul is, as his mother calls him, the “perfect bachcha.’ He’s an affluent, in-demand, published novelist, living in London. All his life, Arjun has felt that he is, as he puts it, just a runner-up. The family reunion soon turns sour. Old scabs are scraped and the hurt in their hearts spills over.

Be warned that Kapoor and Sons isn’t heavy on plot. It’s about characters, moments, textures and emotions. This is a very hard thing to pull off and the first half is a bit of a slog. It feels like director Shakun Batra who has also written the film with Ayesha de Vitre, is finding his rhythm. Disconnected scenes follow one another and even though the acting is uniformly good, the drama doesn’t grip you. The narrative seems random and repetitive.