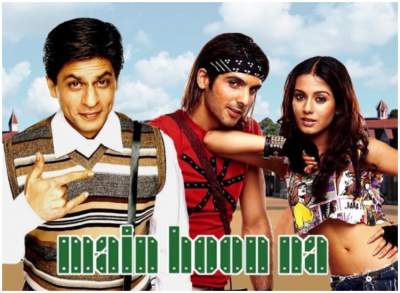 Over an attempt to de-escalate tensions between the two nations, India and Pakistan launch Project Milaap, a prisoner exchange program. Raghavan Dutta (Sunil Shetty), a former Indian special forces soldier discharged for murdering Pakistani citizens in revenge for the murder of his son, shoots his former superior, Brigadier General Shekhar Sharma (Naseeruddin Shah) at a press conference. Raghavan runs a militant group with a former comrade Captain Khan (Murali Sharma), set against peace between the countries.

On his deathbed, Shekhar informs his son, fellow soldier Major Ram (Shah Rukh Khan), of his other son Lakshman (Zayed Khan), and asks Ram to reconcile with his family. Meanwhile, Ram’s boss, Gen. Amarjeet Bakshi, sends him undercover to protect his daughter Sanjana (Amrita Rao), who studies at the same university as Lakshman. During a race, Lakshman is saved by Ram from falling from the university’s roof. The trio becomes friends, and Ram moves in with Lakshman and his mother Madhu (Kirron Kher). Outside a cinema, Ram saves his classmate, Percy, from an assassination attempt by Khan; Ram captures him, but his true identity is found out by Raghavan, who arrives at the university masquerading as a teacher.

Ram falls in love with his teacher, Chandni (Sushmita Sen), while Lakshman falls in love with Sanjana. At prom, Raghavan orders a kidnapping on Chandni, but she is saved by Ram. After meeting with Sanjana, Ram requests Raghavan to drop the pair to her father. Raghavan reveals to Lakshman and his mother of Ram’s true identity; Ram informs them his father’s last wish implored him to reconcile with his family, but leaves their home and the university when they refuse to accept him.