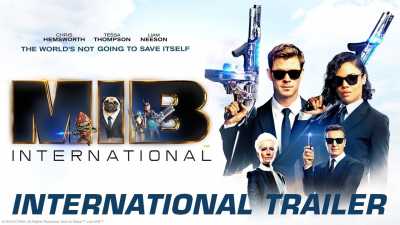 It’s time once again for what must now be called the Meh in Black, making another intensely tiresome and pointless reappearance, now with Liam Neeson and Chris Hemsworth on exceptionally charmless animatronic form in their dark suits

like Tussaud dummies with a contractual obligation to appear in a bad film. They are equally dead-eyed with or without the dark glasses. The MiB franchise – based on Lowell Cunningham’s 1990 comic book series about secret government agents battling aliens – was looking pretty moribund at

The time of the third film in 2012, when Josh Brolin gamely joined the familiar duo of Tommy Lee Jones and Will Smith. Now they look like undertakers at their own funeral.

Neeson and Hemsworth effectively replace Jones and Smith, and, this time around, Tessa Thompson is added to the mix to challenge the gender stereotype of the black-clad “men”; with Dark Phoenix, the X-Men just went through a similarly insincere and perfunctory bout of self-questioning on this issue.

In a similarly earnest spirit, this MiB tackles the idea of aliens as migrants who are not necessarily to be reviled, although this notion goes nowhere and the film can find no way to handle it as anything other than a tricky complicating factor.

Thompson herself, usually a charismatic performer who was stylish and amusing last year in Boots Riley’s satire Sorry to Bother You, now has the life squeezed out of her by this wearying film.