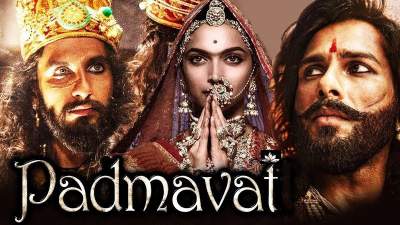 The creation and eventual release of Padmaavat may well make for a more dramatic and impassioned tale than the film itself. The offscreen narrative is complete with death threats, bounties on noses, altered spelling, digitally clothed bellies, and, as I’ve written about before, politically shielded psychopaths encouraged by the media. What spectacle dare compete with a country gone bonkers?

Not that this film doesn’t try. Director Sanjay Leela Bhansali, a man well versed with excess, lays it on thick to the point of being tiresome. This is an all-out assault on the senses, a circuitous take on an old legend that is now being flogged to breaking point. Based rather loosely on the epic poem of the same name by Malik Muhammad Jayasi, here we have a king and his lovely queen, interrupted by a barbarian who, on hearing that the queen is pretty, lays siege to their city. As you may probably be aware, all of this ends in a climax that, as the kids now say, is lit.

Alas, Bhansali takes an unbearable length of time to spark the flame. Things go on and on and on, with characters it is impossible to care about. They may appear attractive from time to time, certainly, but these protagonists are inconsistent, infuriating and test the patience. There is only that much of a damn that can be given about window dressing, and about people who dress like windows. (I’d accuse the film of navel-gazing, except visible midriffs have since been cloaked by our censor board.) The word ‘Nayaab’ – meaning ‘invaluable’ – is used several times over in the film, for different objects: a priceless gem, a priceless ostrich, a priceless princess. As a result, nothing seems to hold true value. This is an epic bore.