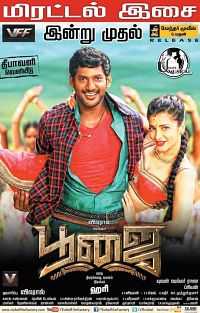 Vasudevan aka Vasu (Vishal) is a Coimbatore-based moneylender and also the heir to the Kovai Group, a cloth manufacturing conglomerate, until he was disowned by his mother and matriarch of his joint family Rajalakshmi (Raadhika) due to some misunderstanding.

He meets a rich girl named Divya (Shruthi Haasan) at a mall, who soon falls in love with him for his good nature. One day, Vasu saves the Assistant Superintendent of Police for Coimbatore District Sivakkozhundhu (Sathyaraj) and his wife (Aishwarya) from a group of thugs who work for Anna Thandavam (Mukesh Tiwari), a Pollachi-based businessman and contract killer who kills anyone to acquire their land and money.

As Sivakkozhundhu was transferred to Coimbatore district to capture Anna Thandavam, the latter had planned to kill him. Anna Thandavam also plans to illegally grab land sold to a village temple by Vasu’s late father Rathnaswamy (Raghuvaran). These two incidents cause enmity between Vasu and Anna Thandavam.

Vasu reconciles with the rest of his family and returns home. When the land is formally sold to the temple, an irate Anna Thandavam assaults Vasu’s uncle Ramaswamy (Jayaprakash), following which Vasu beats him up in retaliation and breaks his hand.

A bitter battle erupts between Vasu and Anna Thandavam, with Vasu, assisted by Sivakkozhundhu, subdues Anna Thandavam’s henchmen and thwarts all attempts by Anna Thandavam to destroy his family. In the process, however, Anna Thandavam’s wife kills Rajalakshmi during the temple festival. Vasu, seeking revenge for his mother’s death, rushes to Patna, where Anna Thandavam is hiding and kills him.