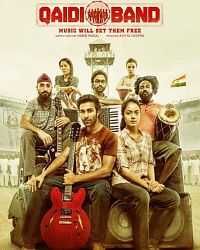 Qaidi Band is an upcoming, 2017 Indian musical drama film, it revolves around seven innocent under-trials, who give a band performance in the prison to get into the good books of the authorities and secure their acquittal. A riveting tale of undertrials who are brought together to form a band in jail for a social event. As their popularity grows through social media, they use their music to protest against jail authorities & the Indian judicial system. Eventually, when all hope fades, music becomes their only hope but will it set them free?