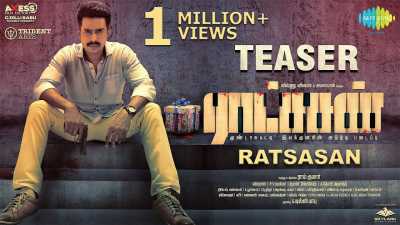 If an image from Raatchasan (Demon) crawls into your eyeballs and gnaws at the brain, it’s this one: a serial killer looms over a petrified little girl, a hammer in his/her hand, with its claw positioned under her chin. One upward stroke, and…

The (suggestive) gore in that sentence is intentional, as is the gender ambiguity. Director Ram Kumar teases the boundaries of his “U/A” rating, with impressively disturbing imagery that’s closer to an “A” (gouged-out eyes, and so forth).

As for the gender aspect, the fluidity is part of the film’s mystery. Also, the film was titled Cinderella, before the more male-sounding Raatchasan. Perhaps they thought the earlier name was too cute, too Disney. Then again, let’s not forget that in the original version of the fairy tale,

by the Brothers Grimm, one of the evil stepsisters cut off her toes in order to squeeze her foot into the glass slipper. It isn’t all that far from a claw hammer under the chin.

Raatchasan begins very unpromisingly. Arun (an impressively focused Vishnu Vishal) is an assistant director looking for a producer who will back his filmmaking debut, but because of family circumstances, he becomes a cop. I wished this whole section had been written differently.

Its relevance to the narrative is that Arun wants to make a film about a serial killer and his research will help him track down this film’s serial killer — but we waste a lot of time (this is a long movie), and the story wouldn’t have changed by much even if Arun had been an obsessive serial-killer buff, cutting out and preserving newspaper articles.

This is a genre where the slightest flab is detrimental to the film’s well-being. But I did like the touch where Arun throws his bound script into the sea, and it’s borne back to him by the waves. He may never get to make that movie. But the events in it will keep returning to him.