Raaz: The Mystery Continues, shortened as RTMC, (English: Secret: The Mystery Continues) is 2009 Indian supernatural horror movie directed by Mohit Suri and starring Emraan Hashmi, Kangana Ranaut and Adhyayan Suman. The film is the second installment inside the Raaz series, but the tale-line is not a direct sequel to the 2002 film Raaz.[3][4][5] The film deals with troubles of the ghosts which might be allegedly widely wide-spread in India and the sector around us. The film attempts to task one’s ideals approximately paranormal phenomena. Emraan Hashmi performs a painter, named Prithvi, who has an amazing present, the ability to color the destiny. His art work tell Nandita’s (Kangana Ranaut) future. 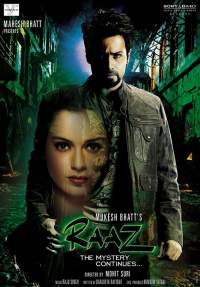