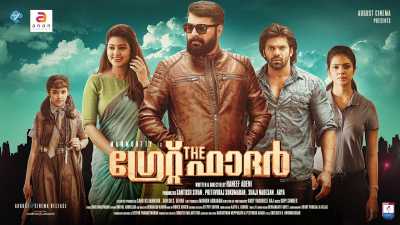 The Great Father is an Indian Malayalam mystery thriller film directed by Haneef Adeni and produced by Prithviraj Sukumaran, Arya, Santhosh Sivan, and Shaji Nadesan under the banner of August Cinema. It stars Mammootty in the lead role as David Nainan (“The Great Father” of the films title) and Arya, Sneha and Shaam in supporting roles. The original release date of 25 December 2016 was postponed to 30 March 2017. The movie collected Rs: 4.31 crore on the opening day, breaking the record previously held by Pulimurugan. Samuel (Shaam) is a police officer investigating serial child abuse and murder crimes. He receives a phone call from a child abuser, who calls himself “Joker”. Samuel tracks his location, goes to his place and is killed by the Joker.