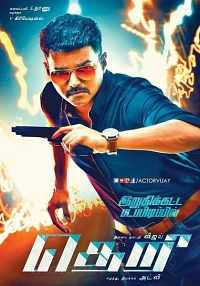 Theri (English: Spark) is a 2016 Indian Tamil-language action thriller film written and directed by Atlee and produced by Kalaipuli S. Thanu. The film features Vijay, Samantha Ruth Prabhu and Amy Jackson in the lead roles, while Mahendran, Prabhu and Raadhika Sarathkumar amongst others form an ensemble cast. Featuring music composed by G. V. Prakash Kumar and cinematography handled by George C. Williams. The film had a worldwide release on 14 April 2016. It has been dubbed into Telugu and was released as Policeodu (English: Police Man) on 15 April 2016, however, the title was later on altered to Police.